I am starting a series of uploads onto the Lionheart Productions Soundcloud page that will update my portfolio of studio work that I have been involved in over the last 12 years, starting with....

This is an excerpt from Raj's guided meditation CD "Gratitude". Recorded at Lionheart Productions in 2016. To achieve the desired ambience and feeling of the meditation offered, Raj created a sacred space in the studio and the meditation guidance was recorded. Then some minimal overdubs and pre-recorded sound affects where added and then edited, mixed and mastered.

Rajinder Singh is the director of the Munay Centre of Shamanic Studies. The vision of Rajinder, it was opened in 2012 to share Shamanic Wisdom & Healing practices in the community of Cork.
www.munaycentre.com
Posted by Rik Appleby @ Lionheart Productions at 09:40 No comments:


Its been a week of nostalgia here at Lionheart Productions, listening back to music that inspired me to get into electronic production and the art of audio engineering.


So presenting here a YouTube playlist, showcasing a collection of Drum & Bass from the early  days of its experimental inception from its roots of Hardcore Rave and Jungle. Spanning from 1993 to 1996 (with a couple of tunes from ´97 -´98 thrown in, ´cause they´re good).

This by no means meant to be a complete collection, just a selection of music that really touched my soul during those days in London, which in context of this music, I found myself luckily living in the midst of this fast evolving scene, with the clubs and record shops in easy reach and blessed with a plethora of multiple pirate radio stations pouring Jungle, Drum  & Bass and Dub out of the stereo speakers 24/7. Keep it Locked!... 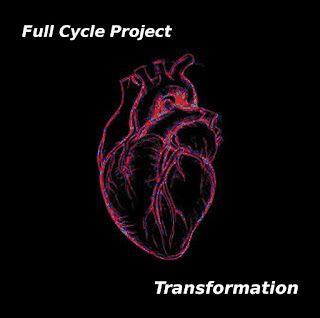 After living with a heart condition since childhood, it finally came to the time in June 2015 where I needed my mitral and aortic valves replaced with artificial titanium valves. These tracks were written whilst in the Mater Misericordiae University Hospital, Dublin.

Its being released today, the second birthday for my two new heart valves. The heart is ticking along very nicely. Enjoy the music!
Posted by Rik Appleby @ Lionheart Productions at 00:03 No comments:

So after some frustrating technical difficulties and an all consuming year studying healthcare at college, I have finally been able to find time to focus on getting the studio back up and running at optimal operation levels. Lionheart Productions is back! So anyone in need of any audio recording, editing or mixing, I'm ready to help facilitate.

The releases I talked about in the last blog entry last year can now be finalised and released. So expect very soon music from my reggae project, Lionheart and an eclectic mix of electronic and acoustic material from Full Cycle Project. All releases will be announced here on this blog and will be available from Lionheart/Bandcamp and Full Cycle Project/Bandcamp


I am also pleased to be starting work once again with Stephen Galvin, who with I had the pleasure to co-produce and record his debut album, Caduceus; Healing Roots (see earlier blog post about that album and its production). Stephen has also has had to put musical endeavour on the back burner while he focused on obtaining  a medical degree at college (well done Stephen!) but he is now ready to start work on new material. Looking forward to hearing his new ideas. Also in the pipeline is the spiritual performer Macha, who wants to capture an improvised performance, along with her regular fellow musicians. Live, in the moment recording is always a great challenge and makes a welcome change from the usual multi-tracking, one instrument at a time approach that is now so common in modern audio recording.

To finish up today's blog entry, here is the up to date Lionheart Productions equipment list. Location recording is absolutely possible, though mixing is better achieved in the studio. Have a nice day 😊


Posted by Rik Appleby @ Lionheart Productions at 15:55 No comments:

Hi there everyone, its been a while since the last blog piece was written and published. A lot has happened since then, not least some refurbishment to the Lionheart. But that is beating stronger than ever now and while the studio computers are having some TLC, I've decided it's about time I began releasing the backlog of material i have been recording myself.

Soon to come will be the début Lionheart EP as well as a couple of Lionheart/Revelation Sound collaborations. But in the mean time, I am launching Full Cycle Project, a new name for the more experimental, electronic/dub tinged music I have made over the years. There's plenty to get out there and I'm starting off with probably my favourite piece of music I've produced so far, a track called 'Solstice'. This piece germinated on winter solstice (thus it's name) when singer Liza Kelly visited the studio at its original location in my apartment on Blarney St. in Cork City for a day of song writing. Several ideas were dreamed up that day but it was this one, with its unusual time signatures and serene  atmosphere that captured our imaginations.

Over the next year it seemed to attract the ears and imaginations of other musicians that visited the studio. Regular musical companion, guitar maestro and at that time next door neighbour Niwel Tsumbu heard the edited Jazz drum loops and came up with a sublime bass line that really glued the rhythm section together. Tanzanian sax player Andelie, who was visiting during the Cork Jazz Festival the following autumn (he played with Sumu and Jazmu at the festival, the bands Niwel and I played in) and wanted to add sax when he heard the track. This transformed Solstice into another place altogether! Taking the string motif I had writen as a starting point for a beautiful Alto and Soprano sax hook, Andilie then  provided two amazing improvised solos. I'm currently out of touch with him but would love to reconnect so he can hear the finished product.

Over the next few years, the track would occasionally be worked on when i wasn't working on other artists projects or writing new material. I did extensive editing... it started out nearly 30 minutes long, with two really long sax solos, so it took a while to whittle it down to its current 12 mins, which is still a long song but it needs the time and space to make its journey. Catriona O'Horan added violin and viola to the programmed sampled strings, giving that touch of realness to them that can be hard to replicate. And then in 2012, with the studio computers having been upgraded with UAD pluggins that emulate vintage recording equipment, i was able to mix the track to a standard i was happy with.

Since then the track has been in storage while i was focusing on the Lionheart reggae project and other life curve-balls thrown my way. But now is the time to clear out the hard drives full of material and release them to the world. This will be the first of many digital releases. I have no plans for a Full Cycle Project CD as yet but maybe a compilation might be gathered in the future. 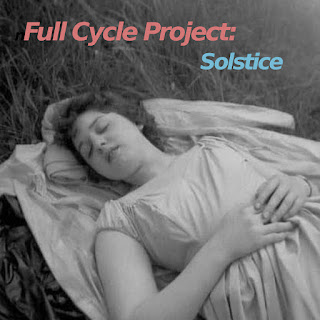 One last note, the artwork design I chose out of a selection i had designed features a beautiful picture of my mother, Francis Appleby, when she was a young woman in the 1950's. There's a connection between her and the track as she passed away on winter solstice the year before to the day the track was initially written. So she was of course definitely in my mind when we wrote the song and Liza was aware of that too. It feels like a requiem to her in many ways.  The picture and the positioning of the text also remind me of the monochrome record sleeves of the 80's Manchester band The Smiths, not a bad thing to pay homage to in my book.

Follow the link below to the Full Cycle Project BandCamp page to stream and maybe purchase the track. For more news on Full Cycle Project, Lionheart releases and other recordings happening at Lionheart Productions, sign up here for regular blog posts or find the relevant pages on Facebook. Enjoy!

Posted by Rik Appleby @ Lionheart Productions at 00:05 No comments:

First review of The Good Rain album 'Some Other Plan'...

Posted by Rik Appleby @ Lionheart Productions at 02:42 No comments:

Yasai, the studio cat, getting in the groove... 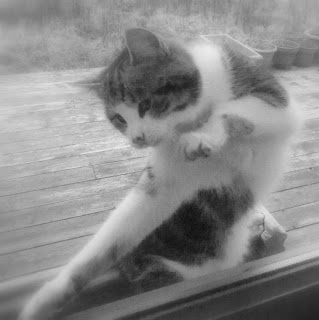 Posted by Rik Appleby @ Lionheart Productions at 23:18 No comments: